Behania is the Leader of New Trinity. Behania has been created by Griddles. There is a puff-version that resembles Behania, which belongs to Gamefan PPG, However, these two characters have nothing to do with each other besides sharing the same name and color pattern.

Behania is the first, and possibly only, example of a Second Generation Puff. Much like her extended family, Behania's creation came purely by accident. Behania originated from a cutting of an extremely rare Central American medicinal flower known scientifically as Orchidaceae Behaniae which was owned and being studied by Prof. Gabriel Lopez, a lecturer and botanist who was a work associate and nearby neighbour of Prof. Utonium. Cultivating flowers and his garden beds in his spare time, Gabriel obtained the rare cutting in order to study its amazing properties. The flower, when properly grown, pruned and mixed with other supplements, demonstrated incredible healing and restorative properties. It had a unique magenta stamen surrounded by light-purple petals and was always kept near a window for sunlight. However, the already remarkable plant would soon become far more once battle found its way to Gabriel's doorstep. Although they lived on the same street as Gabriel, the Powerpuffs had little contact with their creator's colleague until they found themselves the target of professional 'Super Killer' and mercenary, The Rook. A heavily injured Blossom, shot down mid-flight by the assassin, crashed into Gabriel's house and bled heavily, knocking the rare flower cutting into the kitchen sink as she tried to clean her wounds. Water and blood laced with Chemical X mixed together, absorbed by the tiny flower. Blossom was knocked off her feet by an explosion strangely similar to the one that gave birth to her, and found herself staring at a young girl, equal in age to herself, who shared a remarkable resemblence. Behania, as she'd later be christened by her adoptive father Gabriel, quickly displayed her own unique abilities derived from the plant that served as her life force. Poorly suited for combat, she proved immensely useful in a support role. Much like the flower, she could cure a vast array of ailments, close even severe wounds and even save a person from the brink of death. She was also incredibly difficult to harm because she possessed an incredibly versatile immune system that could block toxins and disease. Her caretaker, however, never truly let her be identified as a Powerpuff despite her wishes and refused to send her to the same school thanks to a long-standing competitive rivalry with the other Professor. Nevertheless, Behania sought every opportunity to assist the Powerpuff Girls and their allies in defending their city, even in defiance of her 'Father's' wishes. Her powers were quite draining, which resulted in an enormous appetite for a girl so young. She shared many traits with her template, Blossom, including a strong speaking skill, a firm sense of responsibility and a respect for saving and preserving life. But this brought great conflict to Behania who, despite her vast abilities, could never bring someone to life again once it was too late. She blamed many deaths on herself and her slowness to react, despite every indication that she was never at fault. Slowly, she grew depressed and fearful, desperately wishing for a way to better take matters into her own two hands. As the war with the pro-Transhuman sect Helix escalated and her caretaker Gabriel began an illicit affair with Biohazard, Behania's plight caught the eye of Helix's founder and Biohazard's sister, Blood. She offered Behania the ability and redemption she so desperately desired. Behania couldn't possibly refuse, and so, she became both Blood's newest pupil as well as her grandest experiment.

Behania has accelerated healing ability, an extreme resistance to injury and illness, is able to create cellular regeneration or necrosis on contact with others' skin and, due to the energy needed for her powers, is a habitual big eater. 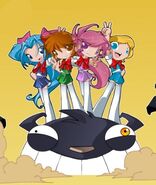 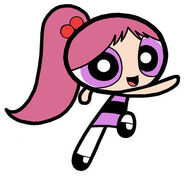 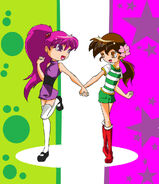 Add a photo to this gallery
Retrieved from "https://snafucomics.fandom.com/wiki/Behania?oldid=57219"
Community content is available under CC-BY-SA unless otherwise noted.