Barrel is a character who appears in Grim Tales. He is best friends with Lock and Shock and is "loyal" to Oogie Boogie. He appears in Chapter 1, 2 and 3 as a recurring character and originates from the Tim Burton film, The Nightmare Before Christmas.

He first captured Grim Jr. and took him to Oogie's Manor and asked him there to tell the past of his parents. After the story Grim Jr. was slammed by Oogie Boogie. Later they withnessed the crual death of Minimandy and after Grim Jr. got the demon powers of Minnie and merged into the destroyed Pumpkinator,  he was killed by newly created Demon Reaper, by having his soul violently reaped.

Barrel is the least intelligent member of the trio of friends, though not ill-mannered[1]. He is easily influenced however and is quickly convinced in doing people's bidding[1].. He is a sweet tooth, as he often carries around candy or other sweet snacks[1][2][3]. He can be loyal to people, althought his loyality doesn't resists with one person and he had several employers[1]. He has a great interest in the potential reaper abilities of Grim Jr.[4] and had no problem in betraying Junior, to Oogie Boogie[4]. He was however horrified, just like Lock and Shock, when the Pumpkinator started dismembering Minnimandy[5]. When confronted with the enraged Demon Reaper, after it merged with the Pumpkinator, he just like the rest of his friends as well as their boss, were afraid of the monstrosity, hiding for its wrath[6].

Although his young age, he has expressed himself as being heterosexual, going so far of calling Mandy hot[7](a remark that was answered by Shock slapping him). and later drooling over a picture of the Bitch Queen[8].

Barrel is the shortest and most rotund of the trio, sporting the same pale grey skin and blue lips as his friends. His head is spherical and he has short, pale green hair. His nose is very small when compared to Lock and Shock's, and it is upturned. His eyes are quite close together and appear to be sunken in, though this could just be an illusion created by the dark makeup around them. Barrel dresses up like a skeleton, wearing tattered purple pants and a like-colored shirt. Both of these pieces of clothing are decorated with bones roughly corresponding to their locations in the human body. Unlike his friends, Barrel doesn't seem to wear gloves, but his feet are oddly shaped, with three toes of the same length. It isn't clear if they are part of his costume or his real feet. His mask is that of a skull; a simple, round, white mask with the mouth being bare teeth set in a wide grin, reflecting the fact that Barrel himself is usually grinning.

Barrel is one of Oogie Boogie's trick-or-treating henchmen. Barrel is the smallest and is dressed as a skeleton. Barrel has a sweet tooth and will do anything to fill it, mostly by stealing candy from others even his co-workers. His favorite kind of candy are black lollipops with orange swirls. 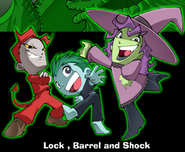 Barrel as in The Nightmare Before Christmas 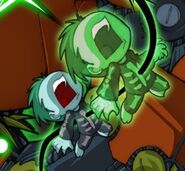 Spirit
Add a photo to this gallery

Retrieved from "https://snafucomics.fandom.com/wiki/Barrel?oldid=56401"
Community content is available under CC-BY-SA unless otherwise noted.