Barney B. Barrington (better known under his alias Mr. Boo Bear) is a character who appears in Sugar Bits. He appears in the beginning of chapter 7.

Boobear told that when he was younger that his father used to beat up his mother. The picture that is in his wallet also indicates he has met, and possibly is friends with, Timmy.

He appears when Ginger who was looking at a gingerbread man behind the window of a shop.  He said to her that she must be starving and that is was not save for her to be alone at night, so he invites her to his home for a nice hot meal. As they start to walk, Boobear leads Ginger to a dark and secluded alleyway, claiming it to be a shortcut where 'no one can hear her should she scream for help'. When they were in the alley he got murdered and robbed by Ginger. Ginger took his wallet, but not much was inside of it except for a photo of him with his friends.

He was later mentioned by Chesna Lovinia , who was looking for him.

On first sight Boobear seems like andacts like he is a kind guy. He cares for all the children[1] in Dystopius and is glad to invite them to his house for warmth, food and drink[2]. He also carries candy with him so children want to come over to his place[1]. He talks in the third person[2], and acts kinda childish. He gets overjoyed when kids come over to him[2][1]. The way he talks and the acts he performs almost make it sound that he is a pedophile[1] , but he really has good intentions[3] .

Boobear is a big man, both in length and wide. He has a black hair that is cut short, exposing his big ears. He has a small beard, but no mustache. He wears an orange sweater with a high collar. He wears brown pants and sandals with white socks. 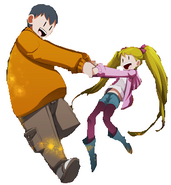 Remaining Photo of Mr. Boobear and friends
Add a photo to this gallery

Retrieved from "https://snafucomics.fandom.com/wiki/Barney_B._Barrington?oldid=56584"
Community content is available under CC-BY-SA unless otherwise noted.