Baby Bear is a character who has yet to appear in Ever After.

He and his parents traumasized Goldilocks after she broke into their house. They attacked her leaving several scars behind on her face.

In Southey's tale, three anthropomorphic bears – "a Little, Small, Wee Bear, a Middle-sized Bear, and a Great, Huge Bear" – live together in a house in the woods. Southey describes them as very good-natured, trusting, harmless, tidy, and hospitable. Each bear has his own porridge bowl, chair, and bed. One day they take a walk in the woods while their porridge cools. An old woman (who is described at various points in the story as impudent, bad, foul-mouthed, ugly, dirty and a vagrant deserving of a stint in the House of Correction) discovers the bears' dwelling. She looks through a window, peeps through the keyhole, and lifts the latch. Assured that no one is home, she walks in. The old woman eats the Wee Bear's porridge, then settles into his chair and breaks it. Prowling about, she finds the bears' beds and falls asleep in Wee Bear's bed. The climax of the tale is reached when the bears return. Wee Bear finds the old woman in his bed and cries, "Somebody has been lying in my bed, – and here she is!" The old woman starts up, jumps from the window, and runs away never to be seen again. 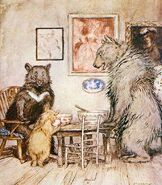 The Three Bears
Add a photo to this gallery
Retrieved from "https://snafucomics.fandom.com/wiki/Baby_Bear?oldid=54099"
Community content is available under CC-BY-SA unless otherwise noted.