A.M.A.Z.O., better knows simply as The Android, is a minor character from Powerpuff Girls Doujinshi. He appeared in the side-story The Forgotten. The character originates from the cartoon series, Justice League.

He appeard when he found Atomic Betty in space. He saw that she was barely alive and read her mind to figure out what happened. He saw that she along with Sparky and Robot X-5 went into Vexus' ship and only she could escape alive. Excusing himself for not being able to save the rest of her crew, he brought her back to Earth, so her legacy would continue. Then he left Earth again, claiming that it would be interesting to observe the upcoming battle but that it isn't his place to intervene in any way.

Being an adaptoid-android, has given Amazo the potential to become the strongest creature in the universe.

Amazo is a tall and overal muscular nanotech creation of the late Professor Ivo. His body is completely gold-colored. He only has a black bar with red eyes in it, further than that he is completely blank on his body.

Amazo is a fictional character that appears in comic books published by DC Comics. The character first appears in The Brave and the Bold #30 (June 1960) and was created by Gardner Fox and Murphy Anderson. An android, Amazo's special ability is to replicate the special abilities of various superheroes and supervillains he comes into contact with. Throughout publication, Amazo has most frequently been a villain for the Justice League, an assembly of DC's most well-known superheroes; Amazo also permanently replicated the powers and abilities of the first Justice League he encountered, making him a very powerful adversary in all subsequent appearances. Based on his design, he is the version shown in DCAU, who ascended to the universe after confronting Lex Luthor in the Justice League Unlimited episode: The Return. 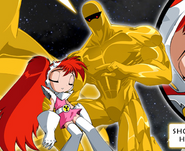 Amazo as in Justice League
Add a photo to this gallery

Retrieved from "https://snafucomics.fandom.com/wiki/Amazo?oldid=57222"
Community content is available under CC-BY-SA unless otherwise noted.