Admiral DeGill is a character appearing in Powerpuff Girls Doujinshi. He makes his first appearance in chapter 13 as the commander of the Galactic Guardians. He originates from the show, Atomic Betty.

DeGill sends forwards a message whilst Global Defense Force, Super-Science Commission, Megaville Division were discussing the current situation of the Earth and its moon. He tells that XJ-9 and the Powerpuff Girls have been summoned by the Justice League at the Justice League International Watchtower. He welcomes the girls and leads them to the conference room where their summoning will be explained.

He reunites with his old friend Weasel again and confirms that his observations are in line with those of Martian Manhunter. DeGill says that the reach of the league is great and shows all the heroes that have gathered. Superman takes the stage and begins telling about the war between the Cluster and the Irken Empire.

He resembles a regular sized anthropomorphic orange goldfish dressed in a blue military uniform with a crew cut of grey and white hair (formerly blonde), and a muscular physique. He also speaks with a slight British accent and usually favours a corncob pipe that blows bubbles.

Whilst DeGill hasn't displayed any powers he is considered a powerful commander and as one of the founding members of the Galactic Guardians he must have some physical strength.

Admiral DeGill is not only commanding officer of the Galactic Guardians but he is also Atomic Betty's immediate superior, and assigns both her and her team to their various galactic missions. 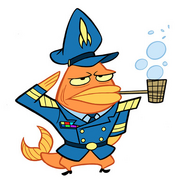 As he appears in Atomic Betty
Add a photo to this gallery
Retrieved from "https://snafucomics.fandom.com/wiki/Admiral_DeGill?oldid=62897"
Community content is available under CC-BY-SA unless otherwise noted.